June Meeting: The 2012 Transit of Venus – a retrospective

The visual observation of variable stars

The AAVSO, mentioned in the introductory paragraph above, has an online facility called the Variable Star Plotter which displays and prints charts that show one or more variable stars and the adjacent comparison stars.

The example shown is for the variable star BH Cru, which is shown in the centre of the chart as an open circle, surrounded by four straight lines. On examination of this star through powerful binoculars or a small telescope, it may be considered that it is brighter than the comparison star labelled 82 and fainter than the comparison star labelled 70. Thus, the magnitude (a measure of brightness) would be between 7.0 and 8.2 (the decimal places are omitted from the chart so that they would not be confused with faint stars). 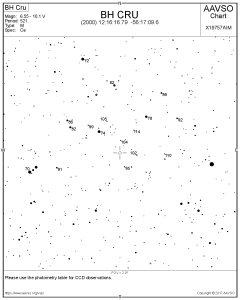 After you have made and documented your observations, you may submit them online to the AAVSO International Database. Having done that, you can plot a light curve on the AAVSO web site, and select the option to highlight your own observations. With practice, and using techniques described by the AAVSO, you can become proficient. Your observations then may be no more than 0.2 magnitude units away from the actual magnitude of the variable star. An error of 0.2 magnitude sounds large.

However, the long period Mira type variables, which are popular targets for visual variable star observers, with periods of many months, have quite large amplitudes (often several magnitudes). In this case, an error of about 0.2 magnitude will not be important, since averaging the results will minimize the random errors.