To appreciate the reasons for the formation of the current Astronomical Association of Queensland, we need to examine the situation in Queensland astronomy in the mid 1970’s. The venerable Astronomical Society of Queensland (the ASQ), that dated back to 1927 was in decline, due in part to vigorous competition from the AAQ Mark 1 (Astronomers’ Association, Queensland) that had been established in 1969 to promote active amateur astronomy.

Bill Newell had been the long-term Secretary of the ASQ from 1942 until 6th September 1971 when he suffered a fatal heart attack. He and his wife Mollie had effectively run the ASQ.  When Queensland operated its own time service before 1958, he had been the official Government Observer, and in his work at the Survey Office he continued to handle all public astronomical enquiries.  He was ‘Mr Astronomy’ and kept a tight rein on the ASQ and also dealt with the media. There had been no interaction between the ASQ and AAQ.  Lacking Bill’s input after his death, the slow deterioration of the ASQ accelerated. Also, the pressures to keep entirely separate slowly dissipated.

In 1976 I had organised a bus trip down to Mt Gambier to view the total solar eclipse on 23rd October, as well as astronomical sightseeing on the way there and back. The 42-seater bus was full and was comprised of members of both the AAQ and ASQ who had also been invited. This shared experience was very valuable in cementing bonds between the two clubs. We could see that we were all astronomy enthusiasts and the ‘us – versus them’ attitude that was present in both organisations abated.

One driver for the ASQ members to remain independent, so it was explained to me later, was to hold out until after they had celebrated their 50th anniversary earlier in 1977. When this was accomplished, they approached the AAQ as set out in the notice for the AAQ meeting to be held on 19th November 1977:

‘Recently the Council of this Association met with that of the Astronomical Society of Queensland to consider approaches made by the ASQ regarding the possibility of a merger of the two organisations.’

After this approach, the discussion between the Councils of both organisations was held at our home at The Gap on 16th October 1977. The AAQ was coming from a position of membership activity and strength and certainly didn’t want to give up their style of operation and their Constitution.  The ASQ was the older body with a larger library and had considerably more funds, in fact more than twice that of the AAQ.  However, the AAQ was quite financially sound itself and finances did not form part of the considerations.

After discussion, it was proposed that in view of the successful formula of the AAQ, that the AAQ Constitution be retained with only small alterations, some of which had been intended anyway. The names would be blended in the new organisation, the word ‘Astronomers’ ’ being changed to ‘Astronomical’, the word ‘Association’ remaining, and the word ‘Queensland’ changing to ‘of Queensland.’ The acronym AAQ remained, and there were subsequently only minimal changes to the existing AAQ logo.

It was agreed also, as an extension of items 5 and 9, that after the current AAQ President, Harold Powell retired, Bernie Doran of the ASQ, who was to be a Vice President of the AAQ, would be expected to succeed Harold as the next President. This was a reasonable recognition of the merger. The term of the then ASQ President Peter Hall would of course cease upon dissolution of the ASQ.

The discussions on 16th October 1977 resulted in the development of a document setting out the ten terms of the proposed merger.  The notice for the AAQ meeting on 19th November listed these terms and asked for membership approval ‘in principle’ to the merger upon these conditions. At the meeting, there was discussion with a few members wary principally of any constitutional changes.  In the end, the vote to merge was unanimous.

It is pointed out that whilst AAQ voting was restricted to Full Members only, as set out in the Constitution, Associate Members were given full opportunity to comment and offer opinions throughout the whole process of amalgamation.

As some AAQ members had harboured reservations about certain alterations to the AAQ Constitution, at a meeting with ASQ Council at Peter Hall’s house on 20th November the following day, it was decided that the initial Constitution of the new organisation would include only the absolute necessary minimum changes, eg. name, additional Vice President and Councillor etc, to facilitate the merger. The ASQ had previously unanimously approved all ten points agreed at the original meeting on 16th October. It was also agreed on 20th November that AAQ publications continue uninterrupted with the existing numbering system remaining intact.

The ASQ had clearly been finding it difficult to continue operating, hence the approach. The reservation within the AAQ was merely that the fine spirit within the club might be ‘watered down’ by changes to the Constitution and perhaps to a lesser extent by the sudden influx of new members. That was the extent of it.  All animosity had gone from both sides.

Whilst the merger was strongly aligned to the AAQ approach, accommodations were made for the ASQ. 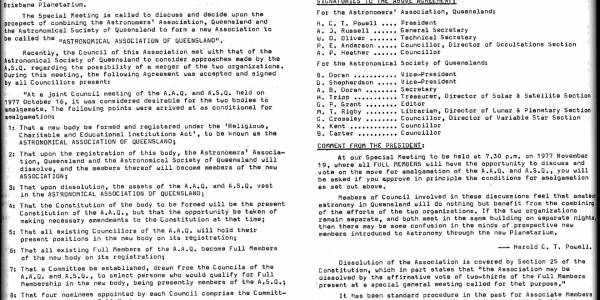 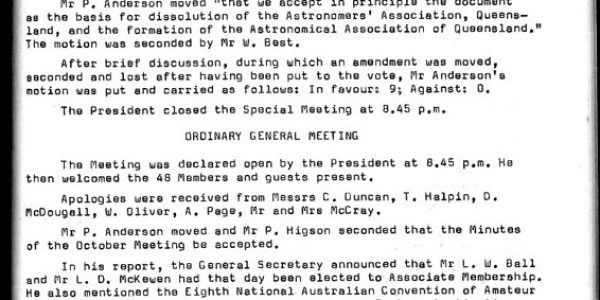 Minutes of the Special Meeting 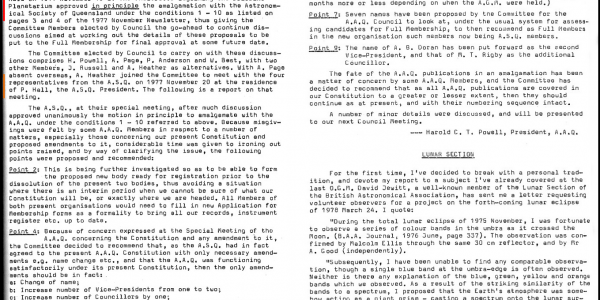 Report on the Special Meeting 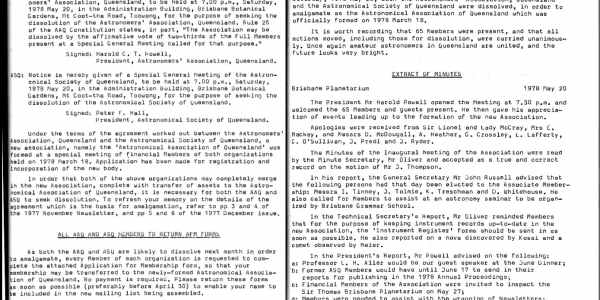 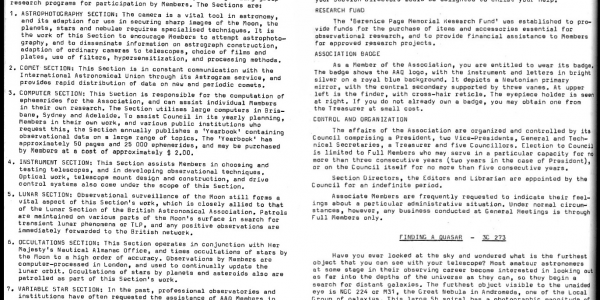 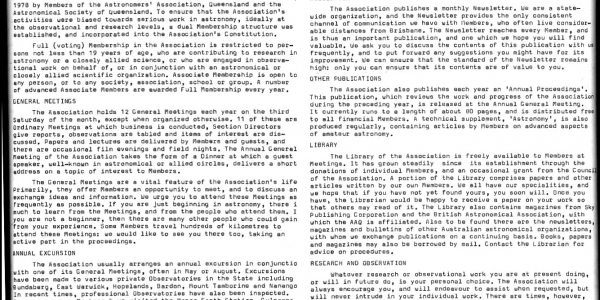 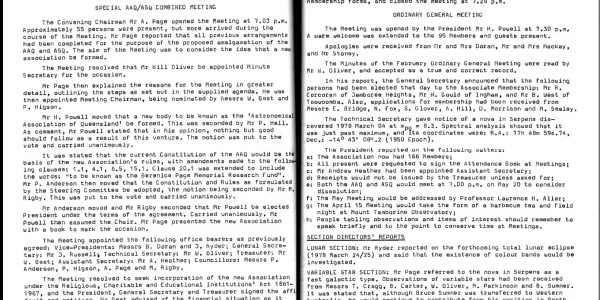 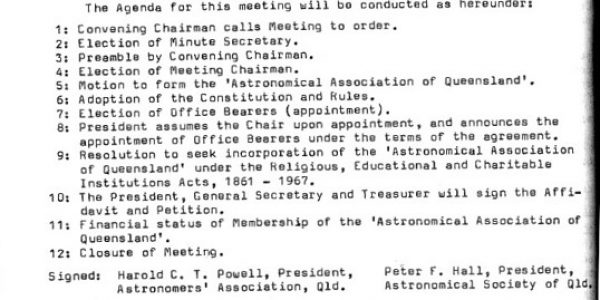 In view of all the careful preparation and consultations, the result of the formation meeting of the new Astronomical Association of Queensland on 18th March 1978 was a foregone conclusion and the Minutes show that much of the time taken in the 25-minute meeting was due to the necessary formal procedure.  Again, the vote of the members of the ASQ and AAQ present was unanimous. Of course, to meet the required paperwork, everyone had to apply for membership in the new body, but no payment was then necessary for currently financial members of either body.

Members from the ASQ were welcomed and a four-page article presented a guide to the new organisation. It is very interesting insight into the AAQ of 1978.

Two months later, when the paperwork was settled and other arrangements had been made, a joint meeting was held on 20th May 1978 and in turn AAQ Mk 1 and ASQ members resolved that each body be dissolved and its assets vest in the newly formed Astronomical Association of Queensland. Again, the vote was unanimous. The Sir Thomas Brisbane Planetarium just on the other side of the driveway from the conference hall where these meetings were held, opened for business on 24th May 1978, four days later.

Finally, a special general meeting on 23rd September 1978 amended the AAQ Constitution as agreed under the terms of the amalgamation and the merger was effectively complete. By then the new body had been operating for six months and any concerns about the amalgamation had evaporated.

Official requisitions concerning the new registration and dissolution of the existing bodies were to take four years with Letters Patent only being issued by the Governor on 10th June 1982, only 20 days before the act was repealed. I imagine that this was the result of a final ‘clear out’ of unfinished business.   The registration of course continues unaffected despite the repeal.

As had been foreshadowed in discussions, the following year, the next President after Harold Powell, Bernie Doran, came from a background of the ASQ.  By then it didn’t matter. We were the one club.

The merger was celebrated by  a special visit to the new Planetarium on 27th May, a special Annual General Meeting celebratory dinner that 73 attended on 17th June, but these had been preceded by an ‘away’ meeting at Mt Tamborine Observatory on 15th April (76 attending), and a trip to Fraser Island between 29th April to 1st May.  My brother-in-law was caretaking Dili Village, the former sand-mining accommodation on the island where we stayed. The ‘Fraser Island Astro Tour’ included ferry passage, a guided tour of various tourist sites and even an aerial flight over the island at a very economical price – 21 attended. Then later in the year, the Cottonvale School ‘Astrocamp’ (organised by John Henley) between 29th September and 1st October attracted 34 members and visitors. Regular observing programs and section activity continued, and an organised light pollution survey was conducted in early July. The activity level was high.

The coming handful of years were peaceful, prosperous, and productive.  Membership hovered in the 220’s. It was a golden age.