We may wish to think of the current Astronomical Association of Queensland (AAQ), as being a ‘new’ organisation resulting from a merger of the venerable Astronomical Society of Queensland and the AAQ Mark 1 on 18th March 1978, but the truth of the matter is that it was essentially an absorption of the ASQ which was in decline by a more vigorous and growing AAQ.  The Constitution and structure in use today, effectively date back, not to 1978, but to 8th February 1969 with the formation of the AAQ Mark 1.

When the AAQ Mark 1 burst upon the scene, it came with a vigour not seen for some decades. Ideas sprouted for observing projects, there being six in the four months to 30th June alone and eight for the full year. There were also eight observing projects in 1970, seven in 1971, siz in 1972, and so on. Some involved just a single researcher, several in collaboration, or including everyone able to assist.

One of these, in August 1969, was to monitor the red dwarf Barnard’s star for flares common to this type of star.  Barnard’s Star is famous as the star having the largest proper motion.  The visual monitoring of this star was carried out using variable star techniques – comparing it incrementally with a brighter and fainter star in the field. The results were negative, no changes being recorded. However wider field photographic short exposure monitoring by Arthur Page showed two flares on B type star 66 Ophiuchi in the same field.  Flares of this type were unheard of for B stars at the time so there was a lot of head scratching.  Subsequently it was discovered that stars of this type may indeed ‘flare’ so it was an important discovery.

As examples, other projects included the oppositions of Mars in 1969 and 1971, and other transient phenomena, meteor showers, a lunar eclipse, a grazing occultation, and the occultation of both components of Beta Scorpii by Jupiter on 13 May 1971.

It was realised as early as 1969 that some of these observations were ongoing – for example lunar occultations and variable stars, ‘moonblink’ monitoring of the Moon for transient phenomena, and so the terminology ‘program’ came into increasing use over the following few years and ‘project’ only adopted where a specific time determined effort was required, often for a single predicted transient event. The ‘projects’ dwindled as the focus shifted more to the regular ongoing observations with a principal observer in charge.  Finally, these ‘Programs’ morphed into ‘Sections’.

The Computer Section seems to be the first so titled and was formed in March 1973 under Lee Lafferty.  In the Annual Proceedings to 30th June 1975, five sections were indicated:

In the 1976 Annual Proceedings they are stated outright as Sections (and issued reports as such), with some changes to show Comet, Computer, Lunar, Occultations, and Variable Stars. Later further changes were made.

The AAQ made it a rule to have an ‘away’ meeting once a year in May.  In 1969 it was to Bundaberg and their newly completed 19” telescope, in 1971 to Harold Powell and his observatory near Chinchilla, in 1972 to John Henley’s East Warwick Observatory, and in 1973 to the Bunya Mountains. Tragically on the return from the 1973 Bunya Mountains weekend, young member Malcolm McCallum was killed when his car rolled over. Others in his car were not seriously injured. The Malcolm McCallum Award for Associate Members was later established.  The next AAQ ‘away’ meeting was held at Mt Tamborine (Page Observatory) in 1974.  In 1975 it was broad ranging and included a visit to the Culgoora Radioheliograph and other facilities near Narrabri, as well as the then new 150” telescope on Siding Spring Mountain. 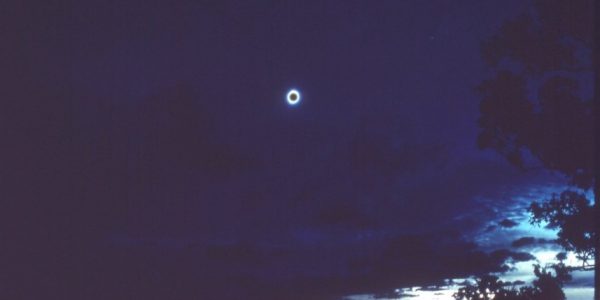 1976 eclipse through cloud in western Victoria 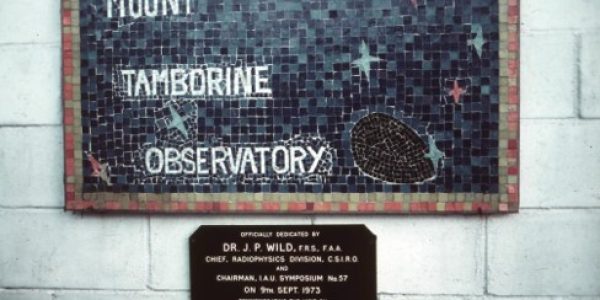 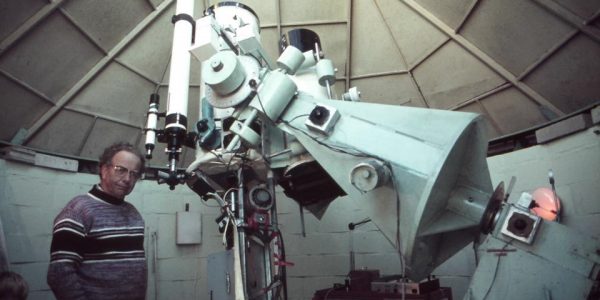 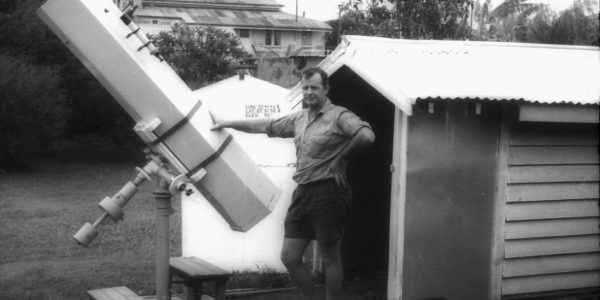 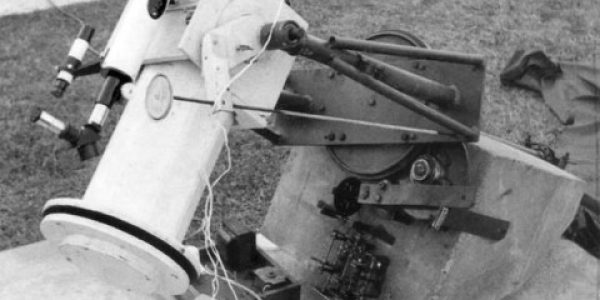 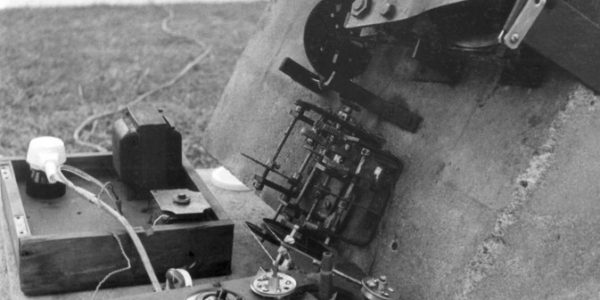 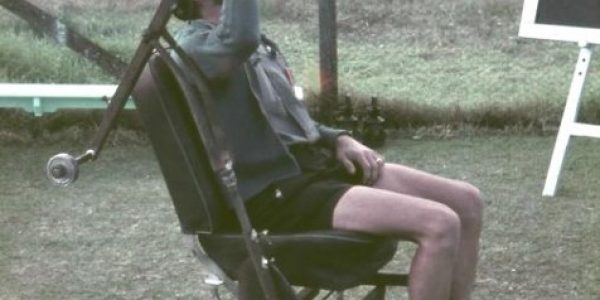 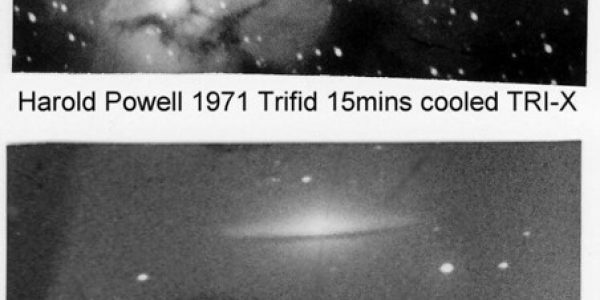 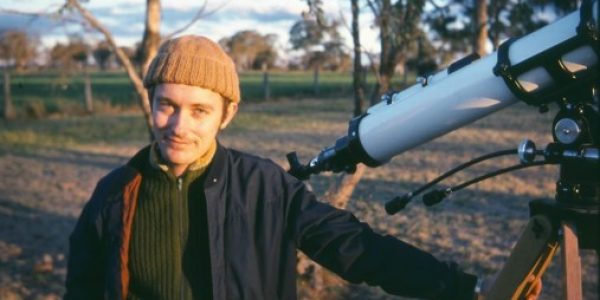 Then in 1976, it was a weekend camp at Murray’s Bridge State School near Warwick (John Henley), a precursor of the ‘Astrofest’.  These ‘astrocamps’ which attracted around 30 or more members were held in 1977 and 1978 at the Cottonvale State School on the Granite Belt.

Also in 1976, a major four day bus trip was organised to the total solar eclipse of 23rd October 1976. This again included the 150” telescope (guided by night assistant and famous variable star observer Tom Cragg) and the Parkes Radio Telescope on the way.  The intention was to see the eclipse at Mt Gambier just over the South Australian border, but the weather  required the group to make a run from cloud, seeing it under thin cloud from western Victoria. This trip with a full bus of 42 persons, was well attended by ASQ members as well and proved one of the key motivators for the later merger. Bill Newell had died five years earlier and everyone on both sides could see that members of the other societies were just ordinary astronomy enthusiasts like themselves – so why be divided? The annual ‘away’ meeting or annual trip was to continue – for example, a Fraser Island tour and a return to Mt Tamborine in 1978.

During this period there was considerable activity within the membership:

Of course, there were other people not mentioned, but it should be clear that the Association and its members were very active. Membership increased over the years after formation from a base of:

An annual ephemeris was being printed as a separate booklet from the mid 1970’s as well as a technical publication ‘Astronomy’. The hardworking long-time Technical Secretary and Computer Section Director Lee Lafferty and his associate Terry Halpin were responsible, but the strain on Lee and on the very hardworking General Secretary was considerable. In Lee’s case it can be supposed that much of the work was mainly of his own initiative, but at one stage, he felt his load was disproportionately very heavy, though much of it was of his own initiative. Therefore, for his own signage he changed the apostrophe in the name so that it read “Astronomer’s Association, Queensland,” namely one astronomer!

The AAQ Mark 1 had grown into an active vibrant body when approaches were first made for merger with the slowly shrinking ASQ. There were those who saw no benefit in a merger, being very proud of what they had achieved in eight short years. Certainly, there was never any question in anyone’s mind of allowing the watering down of their unique constitution or their focus.

In my next article I will detail the steps leading up to the merger the merger itself, the merger meetings being held in the conference hall across the driveway from the new planetarium which was soon to be opened.  The period of peace and harmony that followed this merger was to last a mere handful of years before personalities came into play.