June Meeting: The 2012 Transit of Venus – a retrospective

The 2022 Berenice and Arthur Page Medal – The BOSS team

In April 2022 the  Backyard Observatory Supernova Search (BOSS) Team, which at the time included AAQ members Brendan Downs and Pat Pearl, was awarded the Berenice and Arthur Page Medal  for their work searching for, discovering, recording, and reporting new supernovae in the southern sky. 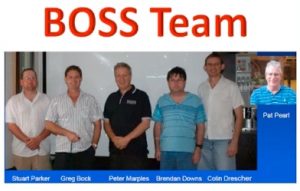 The 6 friends who make up BOSS monitor distant galaxies to detect the death throes of massive stars as they explode in brilliant supernovae. The team then alerts professional telescopes to swing into action and study these phenomena at the crucial moment. The sooner those observations begin, the more is learnt about the lead up to the star’s final moments.

The BOSS Team make their observations from backyards in Brisbane, on the Gold Coast and from a dairy farm near Christchurch, New Zealand. The team are Pat Pearl, Stu Parker, Greg Bock, Peter Marples, Colin Drescher and Brendan Downs. They have discovered about 200 confirmed supernova over the years.

For the first time the 2022 Page Medal was a joint award, the other recipient Trevor Barry who found a white spot on Saturn, which turned out to be an electrical storm.

The Page Medal is awarded every two years by the Astronomical Society of Australia (ASA) to recognise scientific contributions that have advanced the field of astronomy. It was established to honour Berenice and Arthur Page, a wife-and-husband team who were amateur pioneers of astronomy in Australia and foundation members of the ASA.