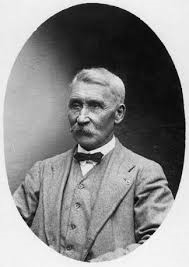 James Park Thomson (1854-1941) was born in the Shetland Islands, son of Laurence Thomson, a farmer.

At age 18 he went to sea visiting the United States and South America. Returning to Scotland he learned the rudiments of marine engineering in Glasgow. In 1876 Thomson visited New Zealand and from 1877 spent two years working with surveyors in New South Wales. Securing an appointment in Fiji, he was registered as a land surveyor in March 1880. His work was reported as comprehensive, thorough, and accurate. He observed the transit of Mercury in November 1881 from Fiji under indifferent conditions. In 1882 he supervised observations of the transit of Venus from Levuka, Fiji and his description of these observations is impressive. He left Fiji in 1884, travelled the South Pacific, before joining the Queensland Department of Public Lands as a draftsman in 1885.1Sometimes his occupation is described as ‘surveyor’.

From his base in Brisbane he computed the trigonometrical survey of the colony. In 1885 he was the driving force behind the foundation of the Queensland Branch of the (Royal) Geographical Society of Australasia. He was its honorary Secretary, President (1894-1897) and edited it’s Journal. Throughout his life he maintained a keen and ‘hands-on’ interest.

As an insight into Thomson’s forthright personality the following quote from page 415/6 of Orchiston’s work on John Tebbutt is enlightening:

As news of the growing tension between Tebbutt and Russell began to circulate throughout the Australian Astronomical Community some looked to take advantage of the situation. On 12 January 1889 the Brisbane Astronomer and Geographer James Park Thomson wrote Tebbutt on behalf of the Royal Australian Geographical Society demanding (not politely requesting) that he write an article on Australian rainfall for them. When Tebbutt refused, Thomson responded by threatening to ask Russell to do the honours. Tebbutt was unmoved.

Thomson’s observations of the transit of Mercury in 18942Newspaper report Page 5 Brisbane ‘Courier’ 12 November 1894 and particularly Monthly Notices of the Royal Astronomical Society pages 316 to 319 (1895MNRAS..55..316T demonstrates his fine scientific approach and thoroughness. He timed this transit using Stanley’s 6” refractor. The instrument was stopped down for the observation and Thomson had three carefully calibrated chronometers. The Governor of Queensland Sir Henry Wylie Norman was in charge of one of them, Mr Clemenson of the Surveyor General’s Staff a second and Mr Stanley the third. The observations were careful and precise. In the superb conditions no ‘black drop’ effect was seen.

Thomson established an observatory at his home ‘Alsatia’ at Dornoch Terrace, South Brisbane (West End/Highgate Hill). The house was rented from Samuel Crowther and is on the north-west corner of the overpass with Boundary Street. It occupied the first three allotments on this corner.  There are newspaper reports about his observations from this observatory which was reported to house an equatorially mounted telescope3Sunspots (The Queenslander 30 December 1899) and a Comet (two reports 9th and 10th May 1901, both in the afternoon ‘Brisbane Telegraph’.

Precisely what instruments were housed, is unknown, but he left the house in 1904/5.The Electoral Roll for 1908 has James Park Thomson, surveyor, (and his wife) residing at Wood Street, in the Division of Oxley which then covered the inner southern suburbs similar to the current Division of Griffith.  Wood Street (before 1957) was the eastern portion of Whynot Street, running between Hardgrave Road and Boundary Street West End. This street is roughly parallel to Dornoch Terrace and the new premises were barely 200 metres away from his previous residence.  So it was not a big shift! 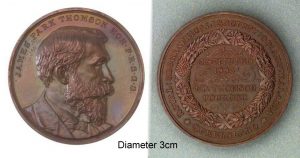 Thomson was involved in discussions that led to the formation of the Australasian Association for the Advancement of Science. He wrote well over 200 scientific papers and was instrumental in the adoption of the zonal system for reckoning time. In 1900 the Queensland Branch of the R.G.S.A. named its foundation medal after him and he was its first recipient in 1901. Other honours included the Peek award in 1902 from the Royal Geographical Society, London of which he was a Fellow, and an honorary LL.D. from Queens University at Kingston, Ontario, Canada (1903). There were other honours and achievements and he was awarded a CBE in 1920. He retired from the public service in 1922 but continued to work tirelessly for the R.G.S.A.’s Queensland Branch4The foregoing was largely extracted from biography by W.S. Kitson and published in the Australian Dictionary of Biography, Volume 12, (MUP), 1990, plus later research by W. Kitson, now retired and Former Senior Curator, Queensland Museum of Lands Mapping and Surveying.

Pugh’s Almanac discloses Thomson’s Queensland employment record. He was employed as a ‘draftsman’ by the Survey Office from 1885. He was often referred to as a ‘surveyor’ although exactly what his duties were is uncertain. He was a keen traveller and may have operated in the field.  He appeared in the Survey Office record for the 1885 year (1886 edition) as being 27th in a listing of 36 draftsmen. Ten years later he was 5th on the list, by 1904, 3rd, by the 1910 edition (year 1909) he was first on the list and remained so until the 1919 Almanac after which the format changed, and individual ‘draftsmen’ were not listed. Presumably there was no change in his employment before retirement.

The Queensland Government operated on a seniority order and these records show steady employment rising up this seniority order. He was never listed as heading any specific tasked sections, and I would venture that he may have been employed on special projects or duties as the occasion arose – for example in 1909 successfully identifying and astronomically determining the position of Burke and Wills most northerly camp in the Normanton area, Gulf of Carpentaria. He visited the area – whether on leave or officially and his report was published in the journal of the Queensland Branch of the R.G.S.A.

He was always a keen traveller with wide connections as evidenced by a 1917 newspaper report about correspondence he had received concerning a lengthy outback trip by motor vehicle.

He appears to have been an asset to the Survey Office and was recognised as such. Mr W Kitson in verbal communication, observed that he had little trouble getting leave from his employment, and was on good terms with many prominent citizens, probably in part due to his founding and long-time association with the Royal Geographic Society of Australasia, Queensland.

James Park Thompson was married twice in Sydney with Anglican rites: on 20 December 1880 to Grace Winter, and, as a widower, on 29 June 1887 to Ada Gannon. An accomplished horsewoman, Ada was also involved with the R.G.S.A. (Q’ld.)5Source: Kitson.

After his retirement in 1922 he continued to work tirelessly for the R.G.S.A. Queensland Branch. According to Eglinton family papers he established an observatory in Brisbane in 1922 but no further details have been identified.

He seems to have moved at least once, probably after he retired and had no need to have ready access to Brisbane city, because the 1937 electoral roll records James Park Thomson at Wolfdene, via Beenleigh, Queensland.

Always a keen traveller with wide connections, Thomson lectured at such towns as Charleville, Roma, Longreach, Blackall and Thursday Island. He raised locals’ awareness of their specific environments, while giving them a sense of union with the wider world.

There is information about a visit to Sydney, probably late in 1932 and there may well have been further extensive travelling.

Thomson died at Kilcoy, Queensland, on 10 May 1941 and was cremated. He was survived by his wife Ada and their three sons and a daughter. Distinguished men wrote laudatory and affectionate tributes, among them Sir Douglas Mawson who extolled Thomson’s ‘energy and enthusiasm.’6Source: largely Kitson