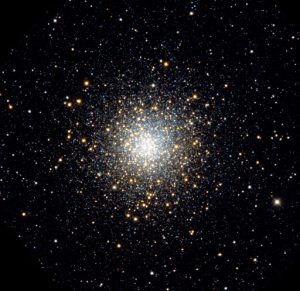 September Meeting: Globular clusters: how to see them in a different light by David Allan

Events leading up to the formation of AAQ Mark 1

Following the upheaval of the division with the Bundaberg group in mid-1964, life settled down and Arthur Page took over the editorship of the ‘Astroquest’ from the departed Vic Matchett.  The next two years were uneventful. The ASQ, as the sole major astronomical body in Queensland, had grown to a peak of 269 members in 1964 on a very much smaller population base than today. The central character was the long-time Secretary, Bill Newell.  He was the official Government observer from the early 1940’s until 1957.  Then Queensland handed over its timekeeping service to the Commonwealth. For timekeeping calibration, he used to time star transits from the roof of the old Executive building.  This included a 4-inch refractor.  The instruments are now in the survey museum.

Bill continued to work in the Survey Office of the Lands Department becoming Assistant Chief Cartographer and handled Government astronomical enquiries. He produced a planisphere for schools and a star chart booklet, and his book, ‘The Australian Sky’ was published in 1965.  He was Secretary of the ASQ from 1942 until his death from a heart attack near retirement on 6th September 1971 on the platform of the Corinda railway station on his way to work. He wasn’t just the Secretary, he was an institution.

The ASQ was effectively run by Bill and Molly Newell. They nominated or at least approved the various key officers and Bill handled all public contact.  One can assume that this was done with the best of intentions to keep things running smoothly, but it dampen individual initiative including proposals for new projects without their prior approval. Things under their stewardship went along routinely and there were few problems, and if routine and uninspiring, management was at least steady and predictable.

But Bill Newell was not an active astronomer and so there was little encouragement from the top to get involved beyond the ‘armchair’ stage. He said, “A 6 inch reflecting telescope was all that was needed to see everything that an amateur could reasonably expect to see”. Observational astronomy did not rank very highly. Nevertheless, in February 1961 the ASQ had established observing sections but these were largely ‘window dressing’ and kept the observing enthusiasts occupied.

There was dissatisfaction within the ASQ, but it was not obvious. I was blithely unaware of any undertones in mid-1966 when I had been ‘tapped on the shoulder’ by Bill Newell to become President.  Beres Page (Arthur’s wife) also nominated and there was an election, which I won by a number of votes being supported, as I was, by ‘the establishment’. I assumed office on 8th July, one day before my 24th birthday. This election was probably not significant merely of itself. Yes, I was President, but especially being very young and inexperienced, I was in thrall to the ASQ establishment.

Arthur and Beres Page had refurbished the venerable 12-inch Eglinton telescope that they were caretaking in their observatory, and they were using it for their variable star research.  However, there was an increasingly strident campaign for access to the instrument ‘at will’ by some ASQ members and this was clearly unreasonable. At the OGM on 12th August the ASQ Observatory Committee was formed and rumblings now began for use of the 12 inch in the proposed society observatory. (The old 18-inch project referenced in a previous article had come to nothing – so was forgotten.)

At a Special ASQ Council Meeting one week later on 19th August 1966, as an apparently unscheduled matter of business, Arthur Page advised he would return the instrument for use in the future ASQ observatory and then did so. He therefore prudently extricated himself from a difficult situation. The telescope was never really used again.  The optics and some fittings are now on occasional display at the Sir Thomas Brisbane Planetarium. (This planetarium likely resulted from an initiative by the Museum Society which had been promoting one for years. It was taken up by the Brisbane City Council, receiving publicity in late 1973, and was completed in 1978.)

The move to establish a society observatory had quickly gathered pace. Plans would include the observatory and support building and a meeting hall and encompassing future ‘full site development’, even a possible planetarium.  The ASQ had made approaches to the Brisbane City Council and on 27th August 1966 the society inspected two potential sites on adjacent knolls at Mt Coot-tha on a spur running off 400 metres further along the road to the West from the lookout (Honeyeater track).  However though having formed an observatory committee, the proposal to ‘get serious’ and establish a building fund was defeated at the OGM on 14 September 1966 by the opposition principally of Bill and Molly Newell.  This led to some dissatisfaction in certain quarters.

In the Newells’ defence, I can at least in part understand their reluctance to get deeply involved in a major project such as an observatory and support buildings.  Given the demographics of the general membership and knowing them, very little would have been achieved as I discovered on a much smaller scale between 1997 and 1999 when I tried to activate our clubhouse with section meetings and extra activities – the clubhouse that had been someone else’s bright idea in the first place.

However, whereas the 18” project in 1963 had started with a £10 slab of plate glass and ‘pie in the sky’ unfocussed plans, this 1966 project had the interest of the Brisbane City Council, and sites had been identified upon which to locate the observatory etc. It had the very definite potential for the Council to be involved and the key supporters within the ASQ included qualified people such as a senior architect Fred Lafferty who drew up provisional plans.

Arthur Page later told me that the failure to establish an observatory building fund was one of the prime drivers leading to the formation of the AAQ Mark 1 in 1969. He subsequently slowly withdrew from participation in ASQ affairs, retiring as Editor in 1967.

I now quote from the first ‘AAQ Annual Proceedings’ (1969) written by Arthur Page: “In November 1966 a nucleus of serious astronomers commenced discussions on the possibility of forming a new-look astronomical organization.  This group comprised Messrs F. and L. Lafferty, Mr J. Van Vegchel, Mrs. Page and I.  We proceeded with caution and deliberation. In the ensuing discussions every factor was analysed, every principle examined in the light of experience gained from an understanding of the local situation, and those existing in other States and overseas…”

Unaware of any of this, when the first year of my term as President was due to expire in mid-1967, I offered to Beres Page that I would not renominate to allow her to stand for the position, at least not opposed by myself. She stated that things had moved on and she was no longer interested. I had simply thought that they were dropping out to concentrate on practical astronomy.

In hindsight, to detail the various factors contributing to the formation of the AAQ Mark 1:

Towards the end of 1968, there were rumours of the formation of an informal practical observers’ club – emphasis on the word ‘informal’.

In January 1969 Arthur Page invited my wife Evon and myself to a meeting at his house in Kellino Street Chermside on 8th February ostensibly to discuss an informal observers’ group.  We believed this was to be a loosely structured group, meeting regularly to discuss observing and observations. The ASQ at that time was largely an armchair astronomers’ forum, with only a few observers.

We were very surprised to be presented with a fully drafted Constitution which was then examined clause by clause. The original name proposed was ‘The Association for the Advancement of Astronomy, Queensland’.  At this meeting the name ‘Astronomers’ Association, Queensland’ was decided upon as more suitable.

This photograph records those present at the birth of the AAQ Mark 1 which flowed seamlessly through to the merger with the ASQ in 1978 to become the present body, AAQ Mark II.  This was the moment of its formal beginning! Perhaps the only people that some older members will recognize are Arthur Page, Harold Powell, and myself. I may well now be ‘the last man standing’.

The Astronomical Society of Australia (ASA), a professional body, was formed at a conference 30th November to 2nd December 1966 a few years earlier. Arthur Page became a member, served on its Council, and ultimately became an Honorary Fellow. (Arthur later also became a member of the International Astronomical Union (IAU) in 1985 and received an Honorary Doctorate (UQ) in 1994. He was president of the AAQ on several occasions and died on 1st February 2011.)

I reference the previously quoted statement from the first AAQ Annual Proceedings in 1969:

“In November 1966, a nucleus of serious astronomers commenced discussions on the possibility of forming a new-look astronomical organization.”

By this time (November 1966), plans for the formation and structure of the ASA as a professional body devoted to the advancement of astronomy were well advanced, and I believe they acted as an inspiration to emulate on a local level.

There were a number of unique features of the AAQ and I will mention just a few: Three classes of membership were created – full, associate, and honorary.  Full members were to be formally qualified or be actually engaged in contributory observational work or research … there was no compromise!  They were the ones who would vote and hold office.

The Constitution was careful to set out the responsibilities of each of the Officers as well as other requirements such as a strict limit to the length of continuous service, considering past experience. The principal provisions, somewhat watered down, largely remain today.

In the original Constitution there was no provision for a ‘Newsletter’ but it included the core functions of the ‘Newsletter’ namely notices to members of forthcoming meetings and minutes. This formed part of the General Secretary’s duties. These started off as simple notices but soon developed into a newsletter produced and dispatched by an overworked General Secretary.  As it developed it first became titled the ‘General Circular’ and from the October 1971 issue has been titled the ‘Newsletter’. The present style AAQ logo first appeared in the November 1972 edition. Currently we have Observing Sections that did not appear in the original constitution – observing activity in the early days being directed towards specific projects, but more of this in my next article about the early days of the AAQ Mark 1.

The first two meetings after formation were held at our home at 7 Hepburn Street, Stafford Heights, where we had a large downstairs room, then at a central city venue, but by mid-year we had settled into our long term meeting venue, the Professional Officers’ Association Rooms at 453 Ann Street, City.