If you have a CCD or CMOS camera designed for astroimaging, or a DSLR camera attached to your telescope, you can perform photometry of variable stars. The simplest photometric procedures are those which capture the times of certain events (such as the times at which the light curve of a pulsating variable star peaks, or the times of eclipse for an eclipsing binary star system). For these studies, you do not need special photometry filters, but you will need to understand the magnitude system, and how to calculate magnitudes from the raw counts or ADUs (Analogue Digital Units) which your camera outputs when you measure the light it records coming from a particular star.

If you wish to undertake more stringent work and capture the actual magnitudes of variable stars, you will need at least one photometric filter for your CCD camera. If you use a DSLR camera, you will need to understand how to transform mathematically the way your camera sees the colours of stars to a standard system for defining star colour (i.e., you will need to determine transformation coefficients for your imaging system), and then use those to make your final magnitude calculations.

All of the procedures you need are described in detail in the CCD Photometry Guide and the DSLR Observing Manual (look under Observing>Observing Manuals on the AAVSO Home Page).

Data from CCD or DSLR photometry can be used to construct light curves, a plot of the change in magnitude of the variable star with time. The example below is a light curve of the delta Scuti pulsating variable star RS Gru, which has a period of approximately 3.5 hours. It represents data obtained by DSLR photometry during one night in September 20217, from 167 images taken over 8.5 hours. From light curves like this, the times at which the peaks of the light curves occur can be determined, and any changes in the period can be calculated. 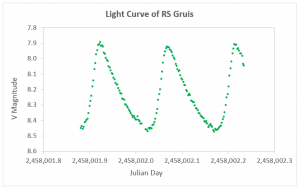